Back from an extended sabatical from this blog, going to start sharing thoughts, exercises, assignments, and all matters of success and failure here in the digital imaging industry. . .


Stay tuned!
Posted by Gene Everett at 4:42 PM No comments:

December 11 marked the first time in ten years that German industrial giants Rammstein performed on American soil.  It also marked my first professional assignment in over three months, as well as my first ever shooting gallery at Madison Square Garden.  I was fortunate enough to be employed by a German periodical, Der Spiegel,  on behalf of a colleague and friend of mine, Lars Halter, who was writing a review of the performance.

Earlier in the day, I had participated in my first ever race, a four mile 'Jingle Jog' through Brooklyn's Prospect Park.  Needless to say, the last thing I felt like doing after that was lugging around a bag full of camera gear through Midtown Manhattan during the heart of Holiday shopping.  However, I've recently employed a Lowpro Trekker bag to haul around my Nikon gear.  It's sturdy, offers lower back support, and has more pockets and storage than one of Inspector Gadget's trench coats.

My partner in crime and I arrived early enough to catch a few frosty beverages at Stout, the local watering hole across the street from the Garden, where we met up with fans who had traveled from the far reaches of the United States to catch this one off show.

I was fully aware of the firepower that this show was packing, so I'd already run through metering scenerios and ISO settings ideal for this type of shoot.  We arrived at the press entrance at approximately 8:45 PM, where about a dozen other photogs from various media outlets were waiting.

In anticipation, I unloaded my rig (in this case two Nikkor lenses, the 24-70 f2.8 along with the 70-200 f2.8) and dialed in an ISO of 1600, which I thought would be safe.  I was also breaking in my new Black Rapid R7 strap, which I was very excited about.
I had already spec'd out the stage location from various you tube clips, and decided I'd like to stay stage right to get the best views for their theatrical singer Till Lindemann, lead guitar player Richard Kruspe, and fan favorite eccentric keyboard player, Christian 'Flake' Florenz.


Under stage lights, there are so many obstacles of light (or lack thereof) that in order to get the best images, it's always smart to stay in full manual mode for control of shutter speed and aperture.   We hit the front of house about three minutes before house lights went down and I was able to land the spot I felt I'd get the best images from.  My nerves were certainly unhinged, not only for the pictures I was responsible for, but for the rust between my ears.  It's a very realistic factor that within the couple hundred frames shot during the three songs allotted for filming that there could be only a few reasonable shots that would come out.  When you get 'in the zone', you often lose site of every little thing, save for the moments in the view finder composing, equating. . .  and praying.  As soon as the band hit the stage, the heat hit me in the face.  Bold, hot propane jets. . . everywhere.  From above, below, and behind, fire was everywhere - my light meter was all over the place.  I had missed the rush, the frantic shutter bursts, dodging fellow shutterbugs in the pit.  It was exciting.  I did get caught up in it, however, for a good thirty seconds - which is a lifetime of shooting at a show.  I was blasting away, and totally disregarded the fact that my shutter speed had dipped below 1/40th which is a BIG no-no.  A good twenty frames were wasted because my speed was way too slow and all you could see were out of focus limbs all over the place and distorted facial features.  I was very unhappy with myself after discovering this sitting at my local watering hole reviewing frames after the show, but I think that the work that did come out of it certainly merits a bit of credit.  However, between losing that bit of quality framework and the fact that I was traveling 'light' - one D700 body to switch lenses between, it was a bit limiting.  Nothing holds still for you here, so scenes are composed and taken apart within seconds, and you have to make the best of what you have from a glass standpoint.  I remember shooting a show earlier in the year using a 50mm prime, which was VERY problematic, I was jumping forward and backward almost as much as the performers were.  The last thing you want to have in this type of shooting situation is something else to worry about.


I remember prior to shooting my first show (Alicia Keys at Prudential Center in Newark, NJ) I was speaking to another professional photographer (one that had very limited experience if any in shooting shows) and he had tried to minimize the level of difficulty that it would be to shoot concerts.  "You just need to show up and squeeze off the frames, let the camera and stage lighting take care of everything".  It's safe to say that if I followed that 'rule of thumb' I wouldn't even have this post to share - I would have been out of a job after that first show.


So, after running through a few hundred frames of the band, it turns out that the shot that the German paper liked best just happened to be one of the lead singer, mic raised to his mouth, and a split second of a propane burst behind his head as a halo that they ran with.  I'm always amazed 'after the fact' how in retrospect I'm so lost in all these moments that I don't even recall the songs played, even if they are some of my favorites.  I am so focused and glued to the eye piece that my only concerns are capturing the best possible images that I can get with the time I'm given. 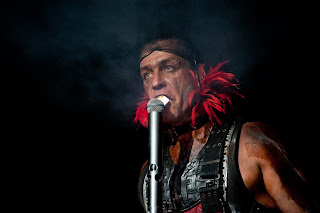 Posted by Gene Everett at 12:17 PM No comments: